The Anti-Defamation League on Wednesday weighed into the controversy over a Trump administration adviser’s comment from 2014 comparing the “demonization” of carbon dioxide emissions with the genocide of six million Jews by the Nazis.

Writing on Twitter, ADL CEO Jonathan Greenblatt said he did not believe the quote from scientist William Happer — who serves on the National Security Council as the president’s deputy assistant for emerging technologies — was genuine until he saw the CNBCinterview from five years ago in which the comparison was made.

The statement in question was made during a heated exchange between Happer — a professor of physics at Princeton University — and CNBC host Andrew Ross Sorkin.

When Sorkin questioned Happer about an earlier comparison the scientist had made between climate change scientists and the Nazis, Happer accused his critics of trying to smear him as a “Holocaust denier.” 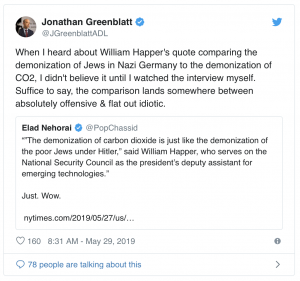 When I heard about William Happer’s quote comparing the demonization of Jews in Nazi Germany to the demonization of CO2, I didn’t believe it until I watched the interview myself. Suffice to say, the comparison lands somewhere between absolutely offensive & flat out idiotic.

“”The demonization of carbon dioxide is just like the demonization of the poor Jews under Hitler,” said William Happer, who serves on the National Security Council as the president’s deputy assistant for emerging technologies.”