Worshippers at a Lakeview East synagogue noticed broken glass on their way to Sunday morning services but didn’t think anything of it.

Later that morning, they saw charred rags and realized there had been an arson attempt on Anshe Sholom B’nai Israel Congregation, according to Rabbi David Wolkenfeld.

“This synagogue is so central to so many people in this neighborhood, and this is such a wonderful city to be Jewish, so it’s shocking to realize there can be someone so filled with hate to engage in an action like this,” Wolkenfeld said in an interview.

Chicago police confirmed that between 9 p.m. Saturday and 8:30 a.m. Sunday, someone tried to set a building in the 500 block of West Melrose Street aflame at two separate locations.

Three broken glass bottles with an unknown substance and charred black cloth towels were found outside, police said. No one was injured, and no buildings were damaged.

Police were contacted after “several incendiary devices” were found on the perimeter of the synagogue, Wolkenfeld wrote in a letter addressed to his congregation and posted on the synagogue’s Facebook page.

Late Sunday, police released surveillance footage of a suspect in the attempted arson. He was described as a light-skinned male wearing a hooded black jacket, black pants and black shoes and was carrying a black bag, according to a community alert issued by police.

The Jewish congregation shares a campus with the Florence G. Heller Jewish Community Center, which runs a day care center and preschool next door, Wolkenfeld said.

Chicago police will be boosting their presence at all Jewish schools, synagogues and businesses in the city, spokesman Anthony Guglielmi tweeted Sunday night. 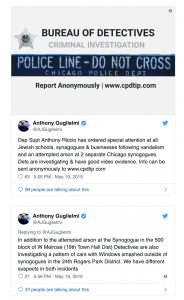 No one was in custody Sunday night, but Guglielmi stated there was “good video evidence” and Area North detectives and the department’s arson unit were investigating.

In the letter posted Sunday on Facebook, Wolkenfeld encouraged his congregation to practice self-care and monitor the feelings of themselves and their family.

“Attacks of this sort are intended to frighten and intimidate us and it is quite natural to feel fear or anxiety,” he said in the letter.

In another instance of criminal damage reported near synagogues, police are investigating multiple broken windows in cars parked outside synagogues in the Rogers Park district, Guglielmi said, adding that there are “different suspects” in both incidents. Four vehicles were damaged, police said.

“This is a sad thing to be happening, but this is a very strong community and we know to come together and support each other during hard times, and that’s exactly what we’re doing,” Wolkenfeld said in the interview.

The Anti-Defamation League released a statement Sunday saying it was “deeply disturbed” by the attacks but thankful no one was injured.

“While thankfully the attacks did not cause any injuries or damage, this incident is yet another disturbing reminder of the recent escalation in attacks against Jews and Jewish institutions.”

Reprinted from The Chicago Tribune