They are coming of age with Parkland and Pittsburgh and the hyper-polarized politics of Washington. And whether you call them the iGeneration or Gen Z, today’s teens and young adults — feeling at once vulnerable and empowered — are entering adulthood poised to upend the Jewish community in unexpected ways.

A major new survey of Jewish teens affiliated with youth organizations suggests that, influenced by today’s toxic political moment, the generation following millennials is already displaying characteristics that could reshape Jewish life in the coming years.

At a time of rising anti-Semitism, perhaps most striking is this generation’s views on the recent lethal attacks on schools and synagogues.

“There’s a sense that they are vulnerable just every day, in their schools, just as a teen in America today,” said Arielle Levites, co-author of the new survey of more than 17,000 Jewish teens conducted in collaboration with 14 youth-serving organizations across the Jewish denominational spectrum. “So the shootings in the [Tree of Life] synagogue, they unearthed a special kind of fear and anxiety and sorrow and trauma, but it’s scary just to go to high school. They’re afraid of getting shot at school.”

In addition to school shootings, teens worry about white nationalism and the increasingly polarized political climate in which they’re living. “Some teens spoke about growing anti-Semitism or the unleashing of a latent anti-Semitism that had already been there,” said Levites. “But a lot of teens wanted to focus on a widening of the political gulf, a lack of civility generally, the current administration.”

The survey was conducted online by The Jewish Education Project and Rosov Consulting from December 2017 to January 2018 with follow-up interviews between September and November 2018. 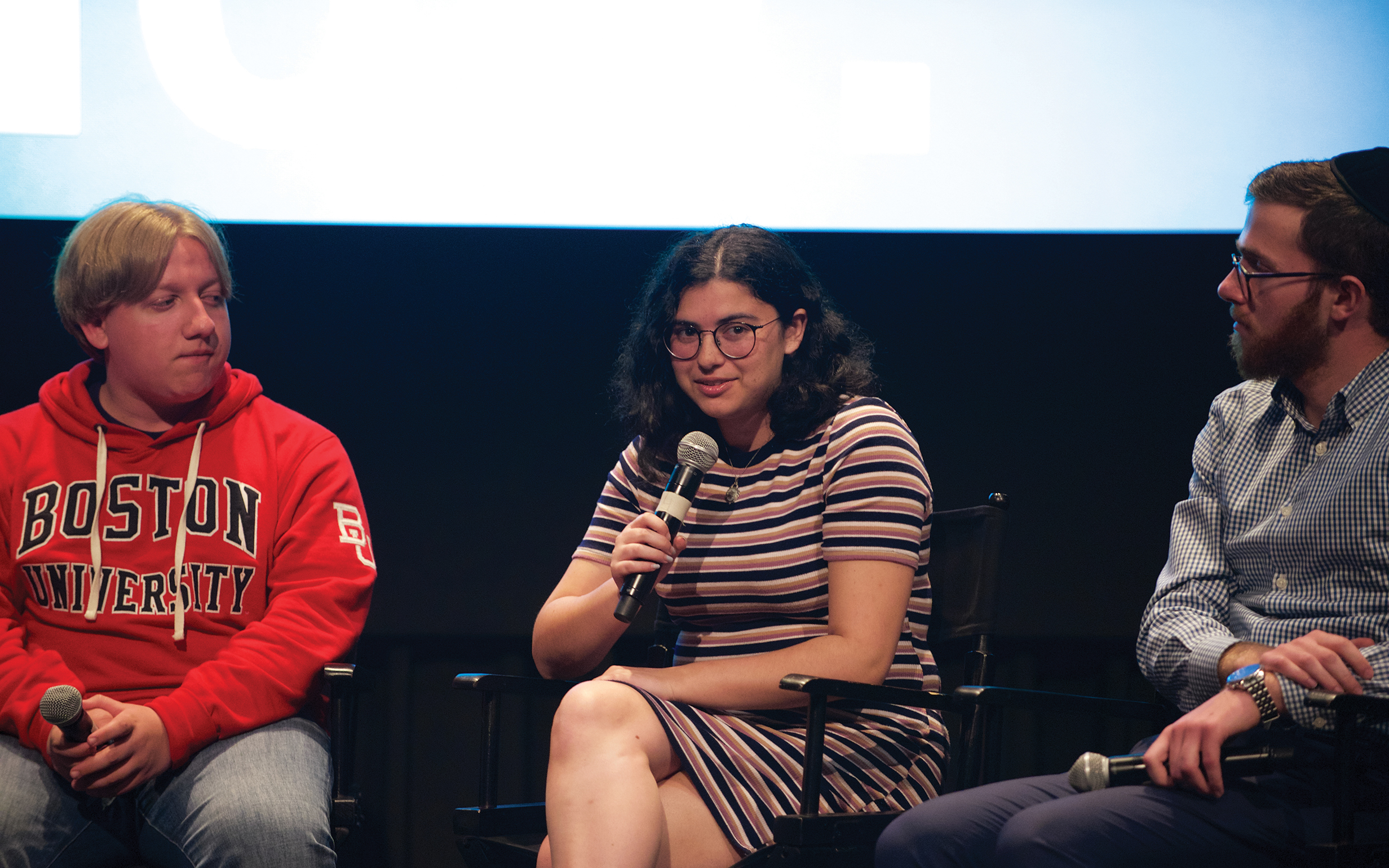 Will Nilson, left, Rachel Landis and Yaakov Fuchs at last week’s event. “A lot of teens,” says the survey’s author, Arielle Levites, “wanted to focus on a widening of the political gulf, a lack of civility generally, the current administration.” Bindelglassphoto

When it came to religious engagement, many teens expressed a greater affinity for Jewish culture than for traditional religious engagement. The teens surveyed displayed an interest in engaging in more than one type of Jewish expression, getting involved with multiple youth organizations across the denominational spectrum. Researchers even found that involvement in more than one youth organization predicted higher ratings on the outcomes measured by the study, such as connections to community.

Alyx Bernstein, a senior at the Solomon Schechter School of Westchester, spoke on a panel at an event launching the report and in an interview with The Jewish Week. “You kind of have to meet Jewish teens where they are; you can’t impose something on us. We don’t want that — we don’t want our parents’ Judaism,” said Bernstein. “Looking at our Judaism as an individualized thing and not the same as everyone else is a really big difference in how we practice Judaism.”

The findings paint a picture of a generation so universalist in orientation that some of its beliefs would be nearly unrecognizable to the generations that preceded it. David Bryfman, CEO of the Jewish Education Project, says that orientation — a world view that is more humanistic than specifically Jewish — is a natural result of trends affecting all teens today.

The study confirmed that today’s Jewish teens, like American teens of all backgrounds, respect their parents and report less conflict with parents than previous generations. The closer relationships between parents and teens could influence the way teens shape their own values in relation to their parents.

That universalist tendency sets up a contrast between the current generation and the ones that preceded it on issues like anti-Semitism and Israel.

“For the Jewish community to begin to understand that we’re raising a generation that cares as much if not more about humanity than they do about specifically Jewish life is not going to sit well with generations older than them and with the established community, and yet that’s the community we’re raising today,” said Bryfman.

Teens’ attitudes towards Israel, according to the survey, were largely positive with 71 percent agreeing or strongly agreeing with the statement, “I feel a strong connection to Israel.” But follow-up interviews showed that some teens felt that their Jewish education around Israel had not adequately prepared them for conversations about the conflict that they might encounter outside of exclusively Jewish environments.

After switching from a Jewish day school to a public high school, Annabelle, one student interviewed in the survey, described her surprise when she learned that there were other perspectives on Israel. The authors of the report quote Annabelle: “I got to ninth grade and nobody at my school likes Israel, because of the whole Palestinian thing. I just felt stupid. I was like, ‘Why has nobody ever taught me this?’ I’ve been learning about Israel for years, but I’ve never heard anything about the other perspective.”

For some teens, a mismatch between their politically liberal values and those espoused by the Israeli government was apparent.

“In their lifetime, they’ve only known a non-socially progressive government in Israel, and therefore it’s only natural that when they apply their world views onto their understanding of Israel that it doesn’t always come out in support of the orientation of the current Israeli administration,” said Bryfman. “The learners today need to be thought of as intelligent discerners of their own information, and the only way you can do that is presenting multiple perspectives and allowing kids to reach their own conclusions.”

Teens’ attitudes towards anti-Semitism and violence against Jews in America revealed a similar multi-perspective approach. While many teens noted a rise in anti-Semitism as a problem uniquely affecting Jews, Bryfman noted a large group that connected rising anti-Semitism with white nationalism and felt equally, if not more, fearful of school shootings.

“Listen, I’m in school a lot more than I’m in synagogue,” said Bernstein, the Solomon Schechter School of Westchester senior. “I do try to attend synagogue a lot … but we’ve been seeing a lot of school shootings for a long time.”

Buffeted by these trends, the report concluded that today’s teens are well served by Jewish youth organizations. Survey participants were asked to rate themselves on 14 outcomes such as a strong sense of self, a sense of pride in being Jewish and connections to community. Researchers found that teens who were involved in Jewish youth organizations showed higher scores on 11 out of 14 outcomes, including outcomes that were not explicitly related to being Jewish.

“These Jewish youth organizations not only help these kids be more Jewish, but help them become better human beings as well,” said Bryfman. “The purpose of being Jewish today is changing for this generation of young people; it’s not necessarily to just be more Jewish, but to become better versions of themselves and to help them thrive in the world.”