We are living in strange times.  We urge all of our readers to take a moment when entering a synagogue or any public place to familiarize yourself with where the exits are.  In the case of Lori Kaye, there was only one exit, and we pray that it led to a better place where she can be hailed for her heroics and be united with the mother whose memory she came to pray for – Editor

When shots rang out at Chabad Synagogue in Poway, California yesterday, Lori Kaye did not hesitate to spring into action.  One of the first bullets from the AR-15 semi-automatic weapon that 19 year old John Earnest struck a glancing blow to Chabad Synagogue rabbi Yisroel Goldstein in the index finger.  Rabbi Goldstein stood his ground – ground that was now under the protection of Lori Kaye’s courage. 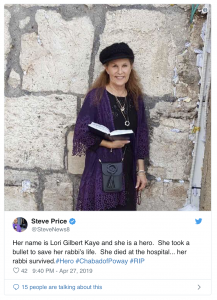 The next bullet meant for Rabbi Goldstein found its mark in the soft tissue surrounding Lori’s heart.  As she fell, the gunman turned this time towards the children as others fell, wounded.  Lori’s eyes closed for the last time as her husband, a doctor, reacted from muscle memory.  He rushed to the fallen woman, and at first not realizing that this was his wife, he began CPR and heart massage. 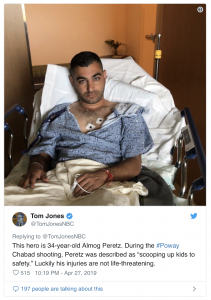 Realization that it was his wife’s heart that Dr. Kaye was trying to resurrect overcame him.  He fainted in a pool of grief and his wife’s blood.  The gunman’s weapon failed as U.S. Border Patrol agent Almog Peretz scooped up the children and huddled them outside.  Bullets sprayed and Peretz was hit in the leg, along with 8 year old Noya Dahan, who took either a bullet or shrapnel.  Peretz was able to return fire at the fleeing gunman. 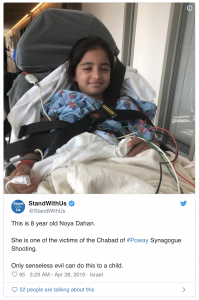 Lori Kaye, of blessed memory, was attending synagogue on this last day of Passover to pray for her deceased mother.  Her husband and her 20 year old daughter survive her.

When you return to school, please take a moment and familiarize yourself with where the exits are.  Discuss with friends and teachers the feelings that you are experiencing.  We are all affected when violence like this occurs, especially when it hits so close to home.