Home / Close to Home: Shooting at Synagogue in Poway, California

Keep refreshing page for developments as it happens.  As we enjoy our shabbat, this news just came to us from a good friend.  Poway, a rural San Diego suburb of Spanish style homes and avocado groves, is now home to anti-Semitic violence.  We will keep you updated on this developing story. – Editor

On the final day of Passover, San Diego County Sheriff’s deputies responded to a shooting at a synagogue that left one person dead in Poway on Saturday afternoon.

One person died, according to Poway Mayor Steve Vaus.

“Deputies investigate reports of a man with a gun. Please stay clear of the area and allow deputies to safely do their job. Thank you for your patience and cooperation,” said the tweet.

A suspect, described only as a man, has been detained for questioning, the sheriff’s office said.

10News learned that at least two people were shot and were transported to Palomar Medical Center. The total number of wounded victims is unknown at this time.

One of the victims, Rabbi Yisroel Goldstein, suffered hand injuries. His condition is unknown. A witness told 10News that despite his injuries, the rabbi was trying to calm worshippers and the gunman.

The Family Assistance Center at Poway High, 15500 Espola Road, was designed as the meeting place for synagogue goers who got separated during the shooting.

The synagogue was hosting its Passover Holiday Celebration which was scheduled to begin at 11 a.m., according to an event announcement. The celebration was to end at 7 p.m. with a final Passover meal.

It’s unknown how many people were inside the synagogue at the time of the shooting.

Saturday’s shooting comes six months after nearly a dozen people were shot and killed in a Pittsburgh synagogue. Robert Bowers is accused of gunning down a total of 18 worshippers, killing 11 of them, at the Tree of Life synagogue on October 27, 2018.

Saturday, 2:26 p.m. :  An AR-15 automatic weapon was used in the killing.  One dead, the rabbi is injured.  Suspect is taken into custody.  2 adults and one girl involved in the shooting.  Poway was a recent home to an interfaith event, according to Poway mayor.  Shooting is at Chabad Synagogue.  Family assistance center is located at Poway High School.
Social media posts of alleged shooter is being investigated.  Suspect is adult male living in the city of San Diego.  More details from sheriffs in two hours.

Saturday, 2:37 p.m.:  Donald Trump, fresh from addressing the NRA, who supports ownership of semi-automatic weapons, has issued a statement that sadly did not focus on the tragedy but veered off into self-congratulations on Japanese trade, his popularity and promotion of his rally this evening, where the mood will obviously be more somber.

“My deepest sympathies go to the people who were affected, the families and loved ones, to the obvious ‘hate crime’.  Hard to believe, hard to believe.  We are doing some very heavy research to see what comes up.  It looks like a hate crime.  We will get to the bottom of it.  The person was apprehended, no more danger.  I’m heading out to Wisconsin right now.  We have a lot of people.  They have been lined up for a day right now.  I have just left President Abe of Japan.  We played a fast round of golf.  Our relationship our military ties.  Japan has agreed to buy a lot of equipment.  We make the best, they buy it.  Again, my deepest sympathies to the families that are affected. ” – Donald Trump

Saturday, 3:00 p.m.:  One adult female has passed.  May she be in blessed memory.  Another female and two adult males have been injured.  Their conditions are not known.  The rabbi was injured.  “This is not Poway.  We will get through this”, remarked Poway Mayor Steve Vaus.  Shooter was apprehended by a brave border patrol agent.  Alleged shooter is a white male.

Social media alert:  The meme ‘Standing With San Diego” is a slap in the face to the community of Poway, which stands on their own and is 20 miles from San Diego.  We ask that you please refrain from using this meme. 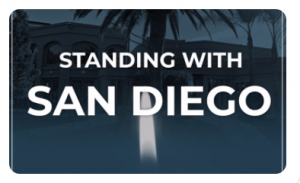 The Dreidel thanks the various news services that we are accessing for breaking news.

Saturday, 3:17 p.m.  Come together in solidarity this last night of Passover by remembering the victims, and noting that ‘we are still not free’.  Jews and other cultures who suffer from oppression and in the line of fire by white supremacists and cultural nationalists share this horrific state of affairs.  It is a bad time in history when Rabbis have to become security specialists.

Saturday, 4:49 p.m.  We are being told that the shooting happened during prayers and that the suspect was fired upon by an armed congregant (the border police agent) who was at services.  Rabbi of Tree of Life synagogue calls out Donald Trump for ‘cheap talk’ of “we are going to get to the bottom of this”.  Is hate being mainstreamed by the president?  “Even last week the president refused to pull back from his rhetoric on white supremacists”, said Tree of Life rabbi.

Attack has occurred six months to the day of Tree of Life Synagogue shooting.  Anti-Semitic hate crimes has spiked 37% since 2016.

Saturday, 5:07 p.m.  Suspect identified as John Earnest.  One adult male currently in surgery, another in stable condition.  Suspect may have been involved in altercation at Mosque in Escondido and other houses of worship in San Diego area.  Anti-Defamation League offering crisis counseling at Poway High School.  Police ask that citizens of Poway report any unusual activity.  Reports that attack may have been live streamed.

Suspect is white and 19 years old.  Islamophobes can stand down.

Saturday, 5:20 p.m.  In the manifesto primarily comprised of racist rants and quotes from the Bible, alleged shooter praises the New Zealand mosque killer, Brenton Tarrant, and the Pittsburgh synagogue murderer, Robert Bowers, and claims that they were his inspiration, and complains about “Jewed-media”