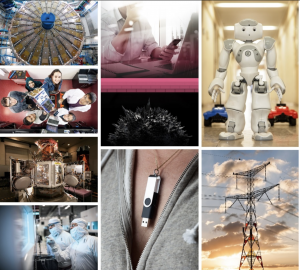 It’s not enough to fight for Israel to survive. We must fight to insure that Israel continues to thrive. During this time of the year when we are compelled to review all that we have done, let’s turn our thoughts to all that Israel has done – not only for us, but for the world. We are often put on the defensive, countering accusations of Israeli ‘apartheid’ with the realities of Israeli diversity. Next time someone slags off on Israel and starts bemoaning how awful this tiny nation is, you may want to recount some of the following ten advances in technology that benefit all people.

In recognition of the country’s achievements in the fields of science, technology and medicine, an exhibition of the most outstanding Israeli discoveries was featured at Ben Gurion Airport a few years ago. A large part of the exhibition was devoted to Israeli Nobel Prize winners; another part showcased Israeli inventions such as the flash drive, Teva’s Copaxone drug for treating multiple sclerosis, the PillCam disposable capsule that films the gastrointestinal tract, a robot that helps with back pain, and Intel chips that were developed in Israel.

What, if any, could be the connection between cancer and ice? It’s a tough one, but the Israeli scientists at IceCure seem to have figured it out. IceCure’s cryoablation technology, which has already shown promise in clinical trials in Japan and the US, actually turns small benign and malignant breast and lung tumors into balls of ice, eliminating the need for surgical procedures. The cryoablation system uses below-freezing temperatures and liquid nitrogen to essentially freeze the tumor in place, in a procedure that takes just 15 minutes and requires only a bit of local anesthetic. Watch out cancer – it’s about to get cold.

If driving is something most of us take for granted, then walking surely is. In the US alone, there are nearly 250,000 individuals with spinal cord injuries that partially or entirely inhibit regular motor functions. For them, standing and walking around freely remains the stuff of dreams. Now, using a revolutionary exoskeleton walking device ReWalk, which was recently approved for home and communal use by the Food and Drug Administration (FDA) in the US, wheelchair-bound individuals are be able to move freely.

At the forefront of medical technology, ReWalk’s exoskeleton is powered not by robots, but by a computer and motion sensors that work together to mimic natural gait. The revolutionary system corrects itself to pick up slight changes in the user’s center of gravity; can be adjusted to a functional walking speed; and even enables users to climb and descend staircases. Claire Lomas was even able to complete the 2012 London Marathon in 17 days using the ReWalk device.

Its systems use video cameras and advanced algorithms to identify and respond to other vehicles, bends in the road, pedestrians and traffic signs, providing advanced warning for drivers and thereby preventing road accidents. Mobileye has already embedded its technology into cars made by Audi, Tesla Motors and others.

Founded in 1999 by Ziv Aviram and Amnon Shashua, the Hebrew University professor who developed the technology, Mobileye raised nearly $1 billion in its initial public offering on the New York Stock Exchange in July 2014, making it the largest-ever Israeli IPO.

Waze: Saving you time on the road

Speaking of driving, no list about innovative Israeli startups would be complete without mentioning Waze.

Launched in 2008 in Israel, and now owned by Google, this navigation app uses a complex algorithm and the real-time speeds of its users to determine the best driving routes. Waze’s strength is its crowd-sourced reports. It’s stronger in denser areas than in rural ones and has the advantage of using both human and machine knowledge. Waze’s initial mission was simply to save five minutes a day for every motorist, but now it has become a must-have app for any driver.

As the world’s attention focuses on news of Google’s self-driving cars, Waze’s innovative technology will certainly play a major role in their development.

Last year, Prof. Hossam Haick of the Technion-Israel Institute of Technology introduced a device that can sense disease on the breath, much like a breathalyzer test. What he calls the SniffPhone uses nanotechnology sensors to analyze the particles on the breath and is able to pinpoint exact diseases, including certain kinds of cancer.

The SniffPhone, Haick’s new mobile device, contains his previously-developed ‘NaNose’ breathalyzer test, which “sniffs out” lung cancer before it spreads. The smartphone device is a vehicle for the NaNose technology that’s mobile and thus can be taken anywhere, including rural areas.

Netafim is synonymous with the famous Israeli invention of drip irrigation, which is now helping numerous countries around the world to conserve water and save money by supplying plants with just the right amount of water. The drip irrigation technique was developed back in the 60s by Israeli engineer and inventor Simcha Blass, along with Kibbutz Hazerim, which later started manufacturing the original drip irrigation systems on site.

Today, Netafim is the world’s leading manufacturer of drip irrigation systems, which save 30-70 percent of the water used with overhead sprays, oscillating sprinklers or rotors.

Israel is known for harvesting energy from the sunlight using solar panels. Now, as solar energy companies around the world are competing for the relatively few vast land areas required to house solar farms, Israeli startup Solaris Synergy has found a new terrain to use. Instead of a land-based solar system, the company decided to develop a water-based technology. In other words: A floating solar power plant. According to Solaris Synergy, any fresh, salt or waste water surface can be turned into a solar energy platform. Founded in 2008 in Jerusalem, the company claims its solar-on-water solution dramatically lowers the cost of renewable energy production since the water surface is also used for cooling the solar panels.

Since water is not just for irrigation, Israeli startup TaKaDu is working on solutions to leaking pipes. Founded in 2009 by CEO Amir Peleg, the company provides a water network monitoring system service that gives water utility companies the capability to monitor their network, detect leaks, bursts, inefficiencies and problems with their equipment or operational issues – all in real-time. The beauty of TaKaDu, which was founded in 2009, is that it uses existing data from already available sensors and meters on the network.

Compression is one of the simplest ways to prevent severe bleeding, and yet it is not suitable in all cases, especially when the injured may have internal bleeding. Israeli-developed WoundClot bandages offer a solution, saving lives within minutes – before the injured even reaches a hospital.

Developed by nano-materials specialist Dr. Shani Eliyahu-Gross of Core Scientific Creations, WoundClot is composed of a highly absorbent gauze made from regenerated cellulose (what plant cell walls are made of). When applied to a wound, this single-use, sterile bandage turns into a gel-state membrane, forming a stable membrane with the platelets (clotting blood cells) from the wound. By enhancing the natural process of coagulation, WoundClot stops hemorrhaging within minutes. Perhaps more importantly, the membrane lasts up for up to 24 hours.

The big buzz around Israel’s Kibbutz Sde Eliyahu, a pioneer in organic agriculture, is that it has successfully left its mark on chemical-free farming with its very own company BioBee. The firm, which was established in 1984, specializes in breeding beneficial insects and mites to help propel agricultural growth in open fields and greenhouses.

Through its subsidiary Bio Fly, the company sells pollinating bumblebees and sterile male Mediterranean fruit flies to help control pests. This well-established firm already exports eight different species of biological control agent to 30 nations, including the US, Japan and Chile.

While it’s hard to predict what the future holds for Israel, one thing is certain: Israelis will continue to innovate to try and make our world a better place, for the next 68 years – and beyond.