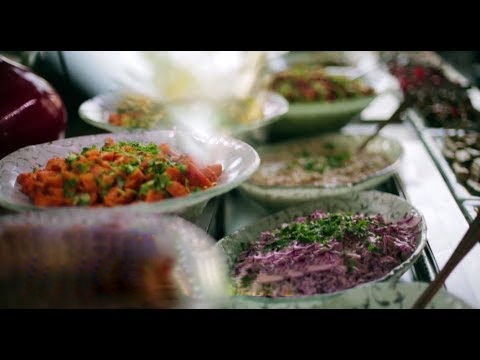 Okay, so I maybe some old guy who doesn’t have a clue when it comes to the latest food fads, but I have to tell you – there is nothing like Israeli Street Food, or Israeli food in general!

Having just come back home from Los Angeles from my brief visit in Tel Aviv, my memories of what I ate haven’t faded away.  So, since you’re probably reading this while sitting in the United States, considering if you’re going to have an Egg McMuffin or maybe a bowl of Lucky Charms cereal for breakfast – here’s what you are missing.

My first night in Tel Aviv, I was whisked away to a restaurant called Jericho by my dear friends Tammy and Avi Ordo, and their talented and beautiful daughter Shir.  The food was off the hook!  While Shir cut me a piece of her Calamari Pizza, I enjoyed a delightful dish of Shrimp.  Yes, I know that’s trait for Shabbat – but with God’s forgiveness I’ll just have to make it up somewhere else.

Shir told me not to miss Susu and Son’s for a hamburger.  Yeah okay, I went and had one.  It was alright, but now I’m being told that I need to go to the original one.  I had mine in Old Jaffa.  But fear not!  I followed it up with a Cheese Danish at what I’m told is the oldest bakery in Tel Aviv,

Next day, I did have one of the greatest hamburgers in the world, at a restaurant called Hamburg.  Located next to the Tel Aviv branch of the United States Consulate, this beach side cafe offered an exquisite burger.

It was a great way to end a day that began with the sumptuous breakfast (and there’s nothing like Israeli breakfasts), at my hotel, the SEA Executive Suites.  I was able to dive into a plate of Shatshukah and sop up the incredible tomato-ey sauce with their incredible fresh baked bread.

But, my dear Dreidel friends – the topper?

STREET FOOD!!  I had the greatest falafel in pita.  I walked the streets of Tel Aviv with sauce dripping through my fingers.  The crunch of the falafel mixing perfectly with the gooey and delicious sauce made me forget how to spell McDonalds.

There is nothing like Israeli food.  But, you’ll have to first visit Israel to experience it. And, if Israel isn’t in your near future, check out the great Israeli stores that might be in your neighborhood.